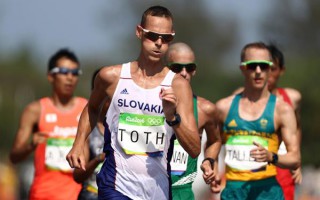 One is the world record-holder, the other is the world champion. But aside from being two of the best race walkers on the planet, Yohann Diniz and Matej Toth are two very different athletes.
While Diniz raced away at the start of the men’s 50km race walk, Toth played a more patient game and waited until the last 10 minutes of the race before taking the lead. He went on to win in 3:40:58, earning the Slovak Republic’s first Olympic medal in athletics.
Diniz waited just a matter of minutes before shooting into the lead on the two-kilometre loop around the streets of Pontal. He went through 5km in a steady 22:10 with a lead of 28 seconds over Toth and defending Olympic champion Jared Tallent.
Diniz’s lead was 30 seconds at 10km and, after a 21:40 5km segment, he reached 15km in 1:05:58, by which point he was 53 seconds ahead of his nearest challengers.
His lead continued to grow. It was 1:23 at 20km and 1:40 at half way. But with Toth and Canadian record-holder Evan Dunfee pushing the pace behind, the chase pack of nine athletes started to make up ground on DIniz.
Disaster then struck for Diniz. Struggling with stomach problems, and possibly exhaustion, he stopped at about the 32km point. When Dunfee, who by this point had edged ahead of the chase pack, came past Diniz, the Frenchman started racing again.
The pair walked together for the best part of a circuit before Dunfee began to pull clear. The Pan-American 20km race walk champion continued to lead through 35km in 2:34:39 and was looking strong. Or much stronger than Diniz, at least.
Diniz eventually dropped back to join five other men in the chase pack: Toth, Tallent, Japan’s Hirooki Arai, China’s Yu Wei and Ireland’s 2013 world champion Robert Heffernan. Diniz then dramatically fell to the ground, but was back in racing a few moments later.
Dunfee opened up a significant lead, but Toth and Tallent rejoined him before the 40km point, Tallent taking the split in 2:56:54. Within the space of 10 minutes, Tallent had a 12-second lead over Toth and Arai, while Dunfee started to slip back.
At 45km, passed in 3:18:47, Tallent was 22 seconds ahead of Toth and was looking comfortable. Toth, meanwhile, was digging hard and appeared to be struggling. But looks can be deceptive.
Toth pulled clear of Arai and then began to close on Tallent. Despite Tallent’s composure and Toth’s strain, the world champion was closing on the Australian.
With the clock at 3:31:45, Toth went past Tallent. The look on Tallent’s face – showing perhaps his first real sign of strain up to that point – said it all.
Drama was unfolding behind, too. Dunfee had slipped to fourth but was gaining on world bronze medallist Arai. The Canadian dug in and went past Arai with just a couple of minutes to go. Arai responded, but collided with Dunfee, forcing him to lose momentum and fall back to fourth.
Toth’s two-second lead over Tallent at the start of the final circuit grew to 18 seconds by the end, and he crossed the line in 3:40:58 to take his second global title in as many years.
After the final turn, it looked as though Arai and even Dunfee would catch Tallent before the line. But the Australian gritted his teeth and held on to silver in a season’s best of 3:41:16.
“When Jared pushed the pace, I didn’t think I could get gold,” said Toth. “He looked very strong, fast and light. The difference at one point was 22 seconds, which I thought was too much to make up.
“When he pushed pace at 40km, I told myself that he deserves it, and that he will be a great Olympic champion. Behind him, I was just trying to achieve everything that I wanted to do.
“After 44km, I saw he was slowing down, so I tried to push. At that point I maybe wasn’t pushing to win, but I just wanted to get all of my energy from my heart and my head into the race. It was only in the last 4km that I thought I could do it.
“It was one of the hardest 50km races in my career; the conditions were even tougher than in Beijing last year,” added Toth. “It wasn’t easy for me, but everyone wants to win.”
Tallent, although disappointed to miss out on gold, was gracious in defeat.
“When I went into the lead, I really thought that this was going to be my moment to cross the line first and become Olympic champion,” he said. “But I just didn’t have it at the end. I’m pleased for Matej, though. He’s a great guy and trains really hard.”
Behind the leading two, Arai crossed the line in third place in 3:41:24 with Dunfee close behind in a national record of 3:41:38. Canadian coaching staffasked for a review of the video, at which point the referee decided that an infraction had taken place. Arai was initially disqualified for obstructing Dunfee, but the decision was later reversed after a protest from Japan.
Yu was the top Chinese finisher, taking fifth place in 3:43:00. Heffernan placed sixth in 3:43:55, while Norway’s Havard Haukenes finished strongly to take seventh in a PB of 3:46:33.
Despite all of the dramas during the race, Diniz managed to finish in a respectable 3:46:43 in eighth, while Caio Bonfim gave the home crowd something to cheer for, setting a Brazilian record of 3:47:02 in ninth place. Australia's Chris Erickson, with a PB of 3:48:40, rounded out the top 10.
Jesus Angel Garcia, making his seventh Olympic appearance, finished 20th in 3:54:29. Fellow Spaniard and world 20km race walk champion Miguel Angel Lopez failed to finish.
Jon Mulkeen for the IAAF
« Back to overview